One place in the Chinatown area of Singapore has an interesting name that caught my attention when I checked out the neighborhood map to chart the course for our walking tour, the Buddha Tooth Relic Temple and Museum. Some questions came to mind: Do they really have Buddha’s tooth there, or is it just a name for the temple? In either case, why is the tooth a significant and revered artifact / relic? If it is a temple and museum, can non-Buddhist visitors come and check it out? What do they show in the museum?

All of these questions were answered as we stopped there after we walked around the neighborhood. The building itself was pretty easy to spot; it’s a seven-story building right across from the Maxwell Road Hawker Centre that unmistakeably looked like a temple, but at the same time you could tell it’s a modern structure (it was built in 2002).

We had some time left before we had to head back to our hotel, so we decided to at least looked closer at the building’s architecture from outside. As we were taking photos outside the building, we saw other visitors walking into the building, and they looked like tourists. So we decided to follow them, and then found out that we’re welcome to come inside and visit. There was a worship session going on, but we could come in to observe from a distance, and we were allowed to check out the Buddha statues on the perimeter wall of the main floor as well as going up to the museum on the higher floors.

This was the first time I entered a Buddhist temple and witnessed a live worship session. There were about 20-30 people sat on several rows of tables, and a couple of monks up front leading the congregation chanting. It was similar to visiting a Cathedral while there was a mass going on and the priest leads the congregation singing or praying. There was also another area where a worshipper could come and meditate in front of a Buddhist statue. We saw several folks doing that instead of participating in the group session.

You were also allowed to go up several other floors of the building. On the second level, there were some more Buddha statues to see, and you could see a bird’s eye view of the worship session on the ground floor from several windows that opened up to the worship area.

One of the higher floors was marked as the floor where the Buddha’s tooth relic was housed. We went up there, and found out that we could come in and see the relic, though we had to take our shoes off in reverence, and only 1-2 visitors at a time could go in to see it for few minutes and photography was not allowed inside. When we went in, there was a monk in the room who was watching the room, and up front there was a glass chamber with a small golden stupa where the Buddha’s tooth was stored. We couldn’t really see the tooth itself, but we just have to trust that it’s there. Later on I learned that the reason why the tooth is an important relic is because when the Buddha’s body was cremated after he died, the tooth did not burn down. So it’s considered as a sacred relic to be used in worship.

There was also another floor in the building that had a museum display that told the story of Siddhartha Gautama, the founder of Buddhist faith, and also the explanation about what the Buddhists believe and about the various manifestations / reincarnations of Buddha. I spent some time trying to take it all in, but at the end it was very complex and it would take some time to internalize. But I appreciated the welcoming and nice display set up in this museum to help people learn about the Buddhist faith. 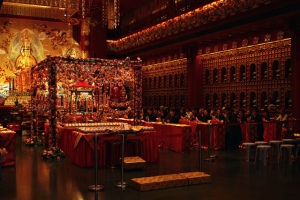