When we walked around the Chinatown neighborhood in Singapore, two of the buildings we passed were among the oldest in the neighborhood and stood out from their surroundings. In the middle of a concentration of Chinese community, there were two houses of worships, a mosque and a Hindu temple, that normally you wouldn’t associate with the Chinese.

Both places are considered as national historic landmark, and appropriately so as they reflect the history and cultural diversity of Singapore as a result of being a port city influenced by immigrants and traders. Masjid Jamae was built in 1820s by the Chulias, Tamil muslims who came to Singapore as traders and money changers at the nearby port. It was among the oldest mosques in Singapore. Not far from there, there is the Sri Mariamman Hindu temple, which was built around the same time for the Hindu South Indian immigrants in the area. Both places are still in use today as house of worship.

One of the reasons why Singapore is a popular destination in Asia is because it is a place where one can experience many cultures meeting in one place and influencing the life there — it’s an Asian cultural melting pot. I think during our short walk in the Chinatown area we got a taste of that; seeing the mix of the different cultures, and also seeing a neighborhood with old buildings preserved with skyscrapers in the backdrop. That’s a great image that represents Singapore as a whole, a mix of many cultures and the old and the new, living in harmony.

I took the photo below outside the Sri Mariamman Temple. I thought it was an interesting picture of contrast with the traditional in the forefront and the modern in the background. 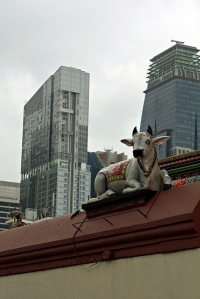