General Henry Knox was another character that I encountered and learned about when visiting Colonial Williamsburg. I listened to the actors portraying General Knox and General Anthony Wayne discussing about their plan to attack the British troops under Lord Cornwallis in Yorktown.

One of the topics they discussed during the planning was whether the light infantry under General Wayne should attack the British troops first, or whether they should perform a siege using the artillery under General Knox. True to the character, General ‘Mad Anthony’ Wayne suggested they should attack more aggressively, while General Knox suggested for bombardment by the artillery. They could not resolve the decision, and later asked General Washington for his opinion (who went for the siege — as it ended up happening in Yorktown). I thought it was pretty entertaining to listen to these actors reenacting such discussion among the leaders of the Continental Army on this decisive siege that was going to happen. It truly brought the history alive.

I noticed also that General Knox wore a black cloth covering one of his hands. I wondered why, and found out later through reading that Knox accidentally fired a shotgun on his left hand at one point and took off two of his fingers. So true to the real character, the actor also had the black cloth to cover his hands.

Like several other historic characters I ‘met’ during my visit to Colonial Williamsburg, General Henry Knox was honored by having places named after his name (Knoxville, Tennessee; Fort Knox, Kentucky).

Below you can see the reenactment of General Henry Knox addressing the troops before they went to Yorktown. 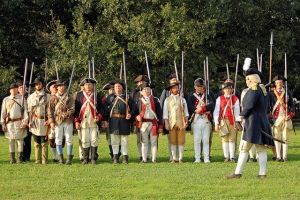