The Duke of Gloucester Street (also known as the DoG Street to the locals) is the main street in Colonial Williamsburg. The street cuts across the old town and lined with many historic buildings and homes. It continued on towards the modern part of Williamsburg through a pedestrian-only street lined with shops and restaurants, and ends at the campus of the College of William and Mary.

Most of the events and activities at Colonial Williamsburg happen along the DoG Street area, and the locals and visitors alike go for shopping and dining at the western part of the street, so this street is easily the most visited area of Williamsburg. I think what is also pretty neat to think about is the fact that the street was named the Duke of Gloucester Street at the founding of the city of Williamsburg in year 1699, and through the years, you had historic figures like George Washington, Thomas Jefferson, as well as more modern figures like Ronald Reagan, Dwight Eisenhower, Harry Truman, Winston Churchill, and many others walked on this same street as you would if you visit the town. Franklin Delano Roosevelt called it ‘the most historic avenue in all America.’

During my visit to Colonial Williamsburg, I spent most of the day along this street attending many events that happened throughout the day. In the middle of my visit, I took a break to look for a lunch place, and I passed through a weekend farmers market that was set up right between the historic district and the shopping district. It definitely had very good foot traffic especially considering it was a nice autumn morning. 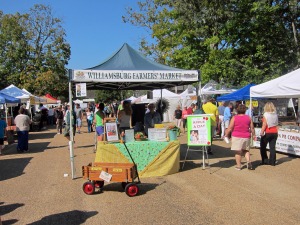