In addition to the 58 national parks that were set aside to preserve the nature in the United States, there are also other properties managed by the National Park Service for other reasons, such as monuments or historical sites that are preserved to commemorate historical events or figures. In the next few days, I will add posts about some of these places that I’ve visited.

The first one to mention is a monument located within few hours from the Badlands National Park in South Dakota, Mount Rushmore National Memorial. This monument is a sculpture of four American presidents on a granite mountain — very recognizable monument, though given its location in South Dakota, unless you happen to pass the area during a road trip or you live in the state, chances are that you’ve never seen this monument in person. In fact, initially the idea of building this monument was to increase tourism to the state of South Dakota.

The four presidents represented on the monument — George Washington, Thomas Jefferson, Abraham Lincoln, and Theodore Roosevelt — were selected by sculptor Gutzon Borglum to represent the first 150 years of American history, and because of their role in preserving the Republic and expanding its territory. The figures were originally supposed to be carved head to waist, but it ended up to be only the heads due to insufficient funding.

I visited Mount Rushmore during a road trip from Rapid City to the Pine Ridge Indian Reservation. We only stopped briefly at the monument to take photos from a couple of different angles, but it was quite neat to see such a familiar monument in person.

The photo below was taken at one of our stops near the monument. You can see the highway in front of the monument and a couple of visitors walking (to give you scale comparison for the size of the monument). 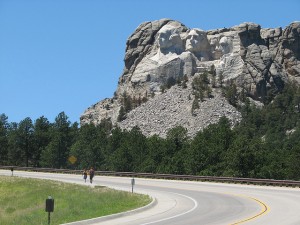