As we walked down the path to the village of Cat Cat near Sapa, Vietnam, we passed many homes and shops where the locals had domesticated animals around, ranging from dogs to ducks, chickens, and pigs. As I remembered our encounters with these animals during our trek (some we met quite literally on the walking path as they freely roamed around their neighborhood), I couldn’t help to think of the difference between these domesticated animals and the ones you now see in big cities / urban areas especially in the western world.

If we observed the domesticated animals we saw in the villages of Sapa, you could likely guess the reasons why these animals were there. Usually they serve a certain function, whether as a guardian, as a helper for work, or as potential meat source. This is probably the same way in most places around the world, at least traditionally.

In big cities and more affluent societies, today you see more and more people having domesticated animals as pets. In some places, having pet is almost equivalent or (some people perhaps even consider them as a replacement of) to having a child. Pets are given treatment that are more costly than what’s given to a human being, and people would argue for more ‘humane’ way of treating animals. I suppose when you have the luxury and options to choose what you want you can do this. I doubt in small, remote villages people would think much about the animal rights or spending extra cash to treat their domesticated animals.

I remembered back when I was little in Indonesia we had a dog that we got from a neighbor and functioned as both a pet and guard dog. We didn’t do anything to abuse the dog or treat it in ‘inhumane’ way, but it didn’t get any special treatment either — the dog would eat leftovers of whatever we ate — nothing specially made or purchased to feed it.

The photo below was taken by Kristi as I saw a couple of piglets on the walking path and I tried to get closer to them to take photos. They ended up running away before I was able to take closer snapshot of them. 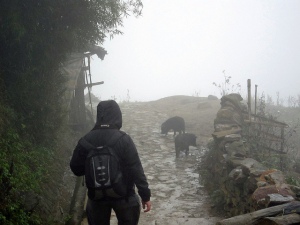