There is a saying that you should not judge a book by its cover. This refers to the tendency that sometimes we form opinion or judgement on a person or situation based on what we’re familiar with in the past or certain stereotype that we know. During the trip to Ha Long Bay, we were reminded about keeping an open mind and not falling into this way of thinking.

One of the groups in our Ha Long Bay cruise was a young couple named Dmitri and Nina. At the beginning of the cruise, when asked by our guide Smiley, Dmitri introduced himself and his wife Nina as a couple from the Netherlands. While we were on the upper deck of the Dragon’s Pearl on the second day, Dmitri did said hi to us and greeted us in Indonesian. He mentioned that he lived for a couple of years in Jakarta when he was young as his father was a diplomat stationed in Indonesia. He and Kristi had a brief conversation about that, but beyond that, we didn’t interact much with them during the first half of the trip. They pretty much kept it for themselves, though they did occassionally talked with Hannah and Sophie whom they shared the lunch/dinner table with during the cruise.

Dmitri’s wife Nina was pretty quiet most of the time, though I noticed her taking photos of the sceneries around with her Canon DSLR and the recognizable white 70-200 mm L lens. So I thought she might be quite a serious photographer to have and bring that lens on a trip like this.

During the candlelight dinner at the cave, Kristi and I ended up seated at the end of the long dining table, next to Dmitri and Nina. As such, we had some conversations with them through the night. I think it started with Dmitri continuing his conversation with Kristi on what he remembered of Indonesia. While they’re doing so, I had conversation with Nina, and I didn’t quite remember how it started, but we ended up having a good discussion over the dinner and I learned more about this couple and the rich life experience they’ve lived already.

What I learned was that while the couple was officially from the Netherlands, they had actually lived in many places in the world. Dmitri’s father was a diplomat, and as such, he had lived in several countries including Indonesia. He went to school in the United States at the Harvard Kennedy School of Government. I’m not sure if that’s where he met his wife, but Nina also went to the same school. And after finishing their study, they also worked and lived for some time in Washington, DC, where I live. They were in the middle of a vacation trip in Southeast Asia before heading to Europe and then continuing back to the place where they call home then, Kigali, Rwanda. That was another interesting discussion I had with Nina, where I mentioned about what I learned and experienced during our visit in Cambodia, and how it’s comparable to Rwanda. Both countries had gone through difficult times after civil war and genocide, and now are in the process of rebuilding. Nina said she worked as a consultant to the government of Rwanda to help coming up with ideas on improving the economy of the country. It’s quite a difficult task as the country didn’t have much of natural resources, nor it’s located as strategically as other countries.

After the dinner, when we went back to our cabin to retire for the night, Kristi mentioned her appreciation of this couple and what they do in helping others in developing countries. She also said that before the dinner conversation, she thought Nina seemed to be pretty cold, unapproachable, and the impression changed after we got to know them better. A good lesson to not assume things from what you see on the surface.

I took the photo below during our visit to the Cong Dam floating village earlier that day. Here was Dmitri and Nina on another row boat. You can see him enjoying the scenery while his wife was taking photo with her Canon DSLR. 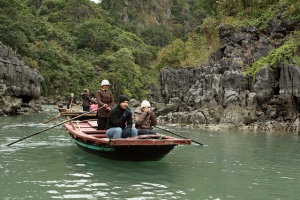